This is one of two hallway closets in the house, and it was the one I tackled in Project: Hallway Closet Cleanup (super creative, I know). 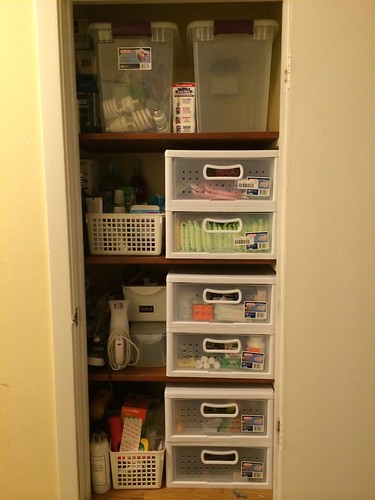 In this closet, we keep first aid supplies, extra toiletries and other bulk household items.

This also happens to include an overflowing supply of bandaids in all sizes, feminine hygiene products, many tubes of toothpaste, Ryan’s deodorant subscription that he forgot to turn off, and two Costco packs of razors because I couldn’t find the first pack I bought and so another was purchased.

While those are all pictured, I’m proud to say that the hallway closet is in the best condition since we moved in! I finally took the time to organize it this past weekend.

On Friday, I picked up two stackable drawers at Target and didn’t do anything with them until two evenings later. After clearing out one shelf and organizing personal care items into and next to the two drawers, I realized that I could easily apply what I had done for the first shelf to the others. So I made another run to Target!

Since the top shelf extends higher, and it would be difficult to open up drawers on the top shelf, I opted for two plastic bins. One holds our excess light bulb supply, while the other is currently empty. There’s a Costco toilet paper run in the works. Bulk toilet paper will take up more room than even that bin will have room for. 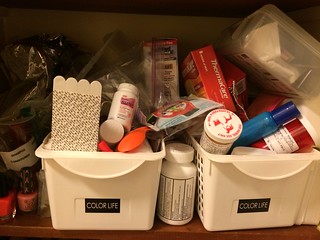 For an idea of what it was like before, here is one of the shelves before the cleanup. My subconscious must have been embarrassed by the clutter because I completely forgot to take photos before I started on the project!

Notice the plastic baskets? Ryan attempted to organize the closet a while back… Hopefully this time it sticks!

With “Back to School” sales in effect, I was able to get some nice deals on storage/organization. It probably would have cost slightly less because the four subsequent drawers that I purchased were not offered at the sales price I found on Friday.

How do you keep your hallway closets organized? Any tips to share?