How to Drive Around Iceland in an Electric Vehicle

“Honey, for (some $ amount) more, we can rent an electric car to drive around Iceland!”

That’s how it always starts. This time, that conversation led to our decision to drive around Iceland in an electric car. It seemed like a sensible choice at that time. Gas is expensive there, and Iceland has recently built an extensive EV charging network. Besides, we thought Why would a rental car company provide EV rentals if they didn’t think the infrastructure would support it? We’ll be fine.

As we’d find out later, the devil is always in the details. This guide might help you if you’re considering the same. It would have helped us! 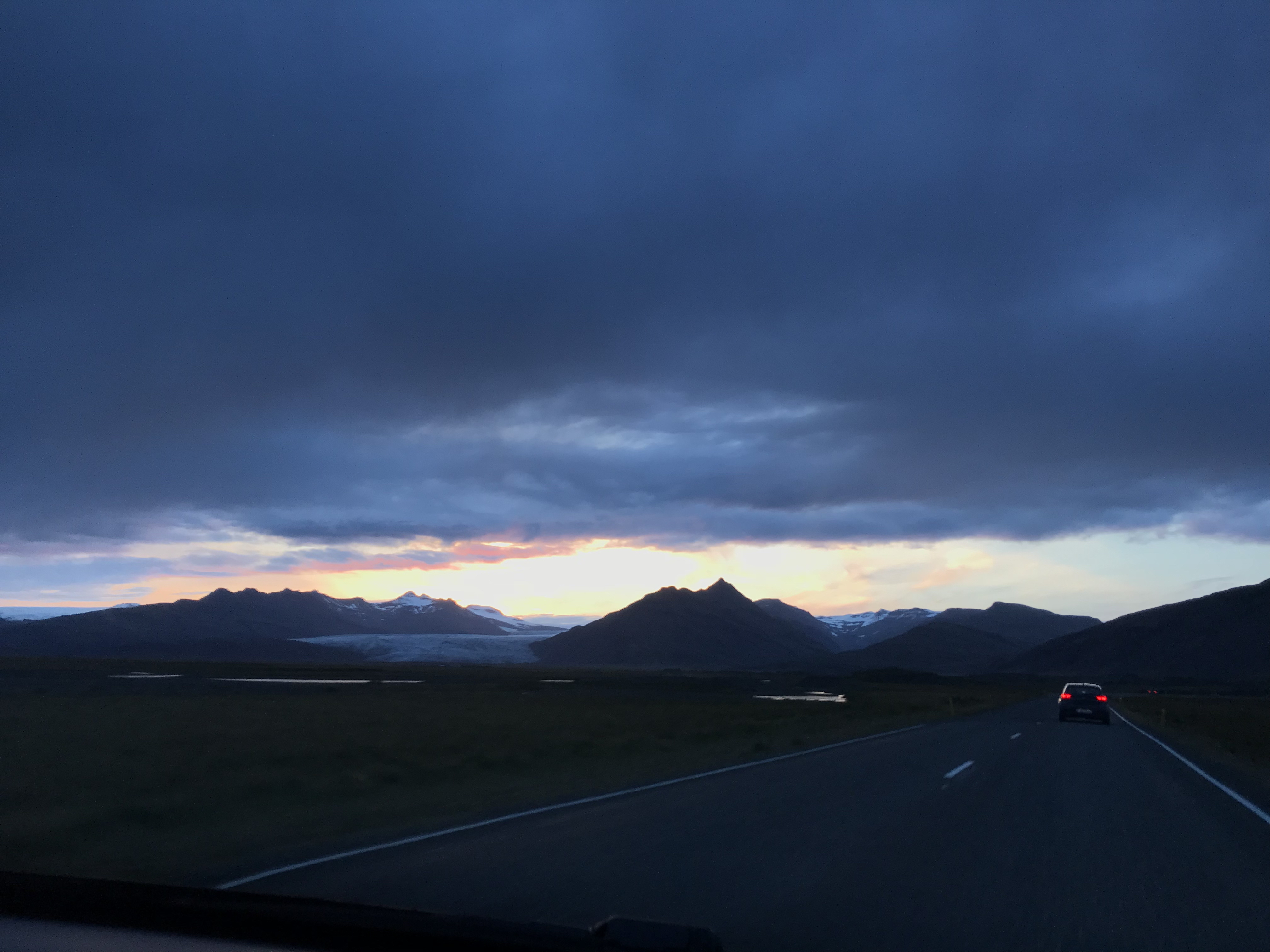 We planned on taking the Route 1 Highway aka the Ring Road - no surprise here as this is the main highway ringing the country and passes by many sites along the way. You can also see how many charging stations dot the route in the app: 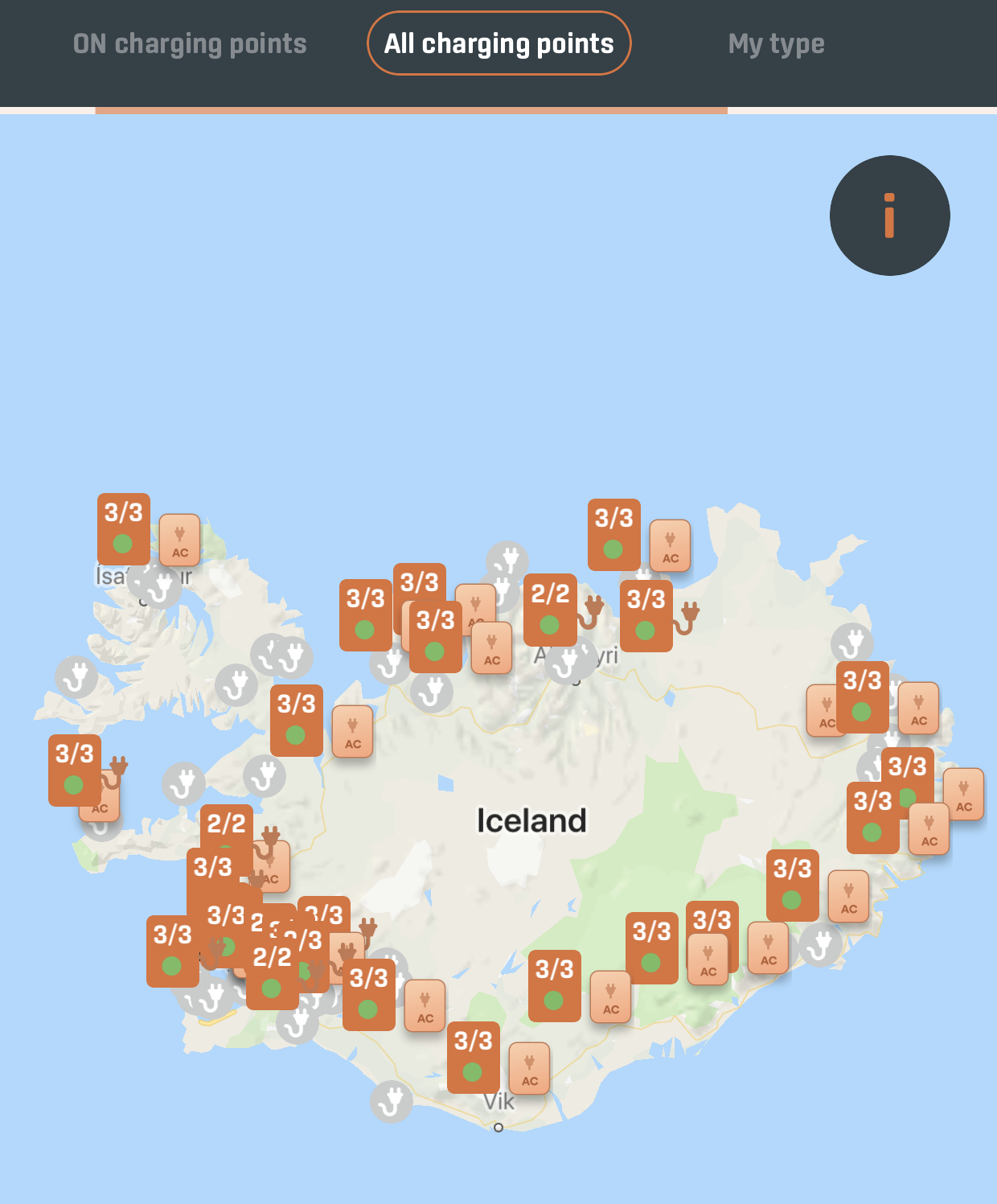 The main energy provider in Iceland is ON Power, and the one who owns the majority of EV charging stations around the country. They also have a halfway decent app.

As we found out mid-trip, there’s another provider, Isorka with a decent number of stations in the larger cities. They also have an app and mobile website, which takes payments pretty easily. 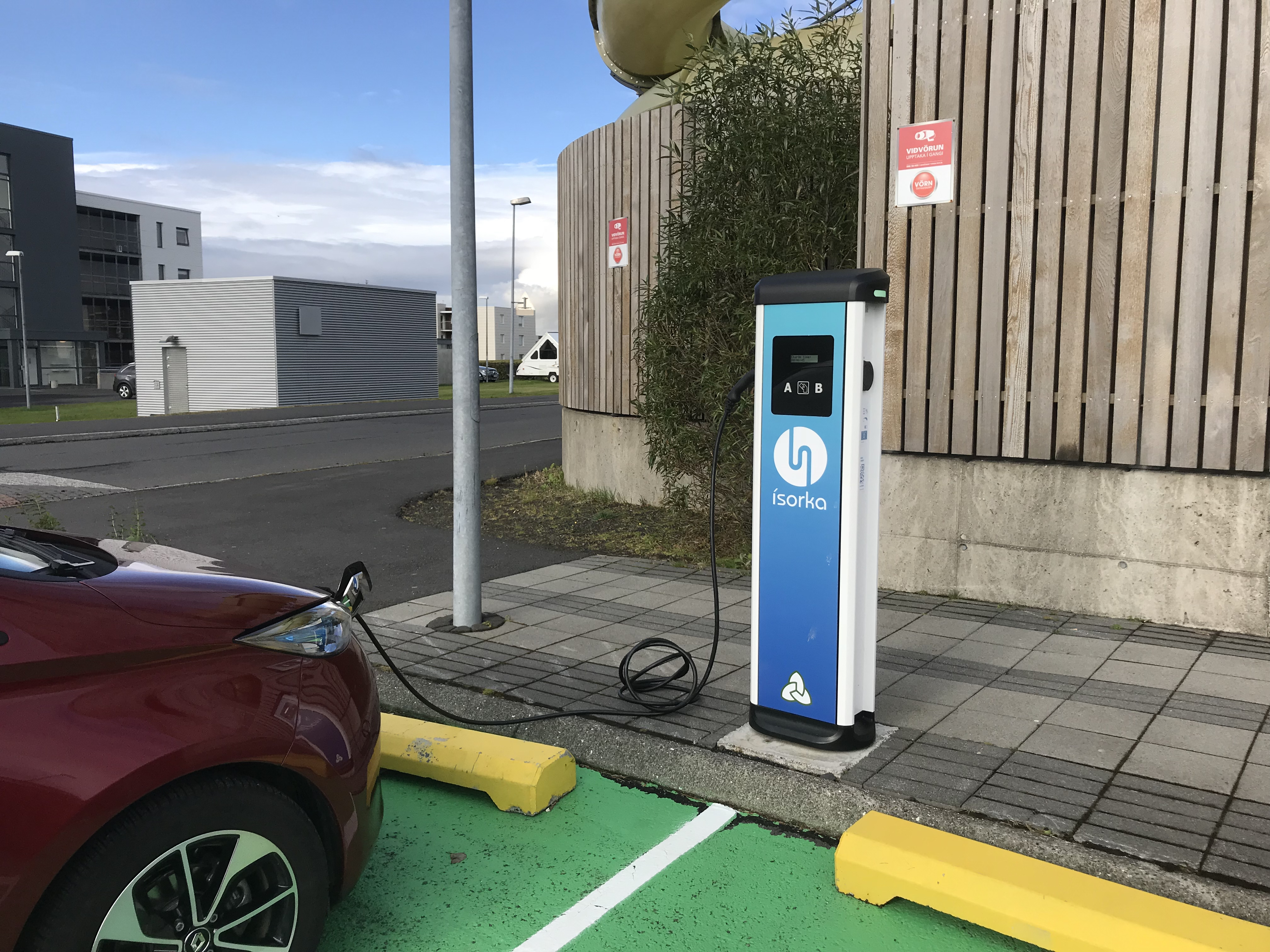 The rental car company we used, Geysir (A local company) had a Renault Zoe available for the week we were in Iceland. We were expecting it to have a 400km range, as stated in the Wikipedia article since 2016 model years, but for some reason it was the (older?) 240km version. Uh-oh. 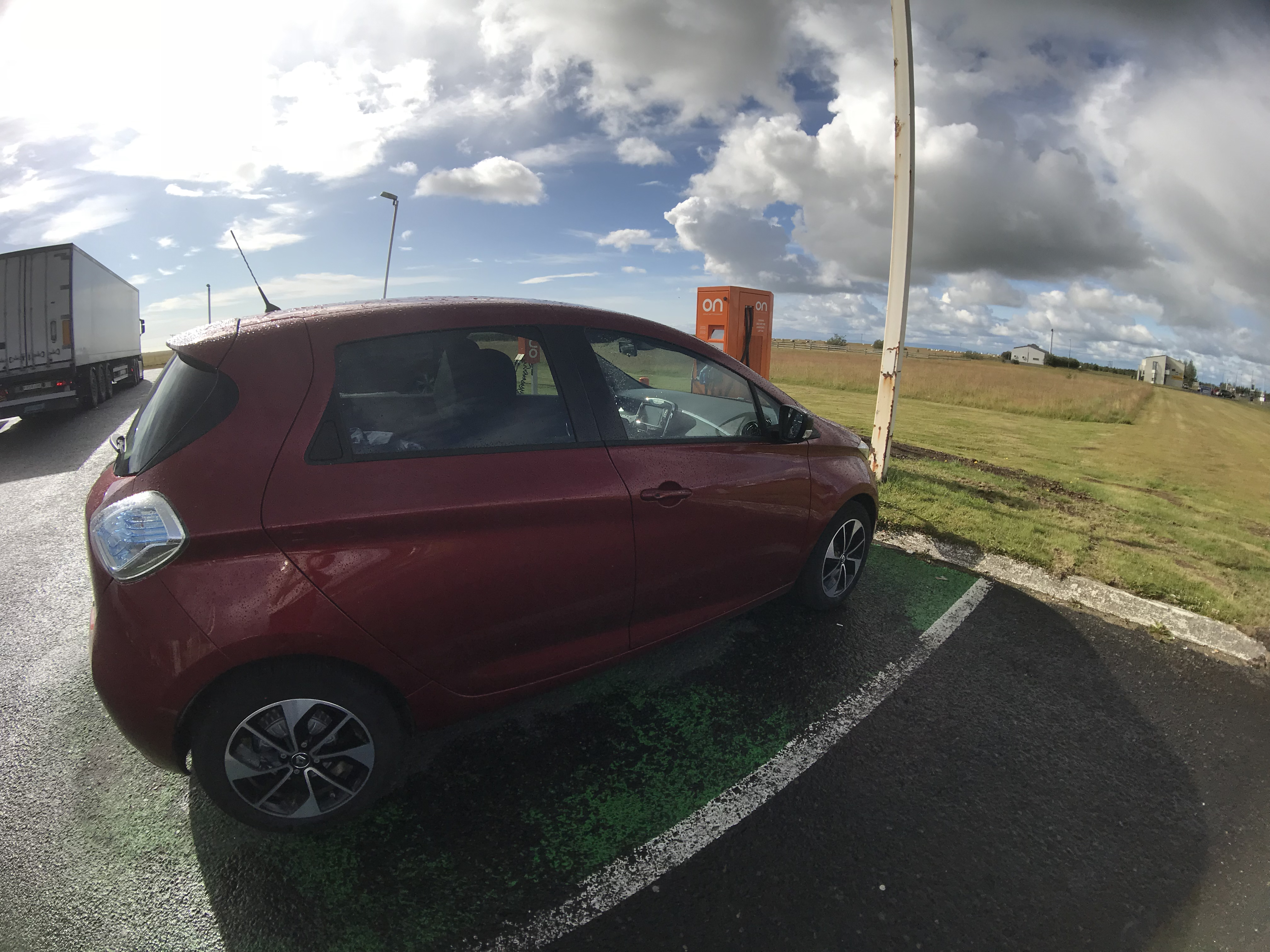 You probably know this if you already own an EV, but we don’t, and we were surprised early on that our range drained faster than actual kilometers driven. Of course how you drive (lead foot?) and things like hills and traffic greatly affect your range. In the case of traffic, the lack of traffic meant that we weren’t able to regenerate energy from using the brakes very often. On the second day, we had to scrub our planned route along the Golden Circle because it might have pushed our EV range too much for comfort.

With the charging network sparse enough, and our range limited, we knew that outside of Reykjavik we’d have to stop at almost every charging station along the way. That also means that each one had to work without a hitch!

In one case, the station had only been installed days previously (but it showed up in the app!), and it wasn’t fully configured to accept all payments. ON charging stations normally allow for paying with a PIN number or with our rental-provided RFID card. This one only allowed PIN payments, which we weren’t set up for. Luckily, there was another person with an EV there who told us we can call the number to get it charging remotely. So we did that even though it would cost us roaming - we had no other choice. 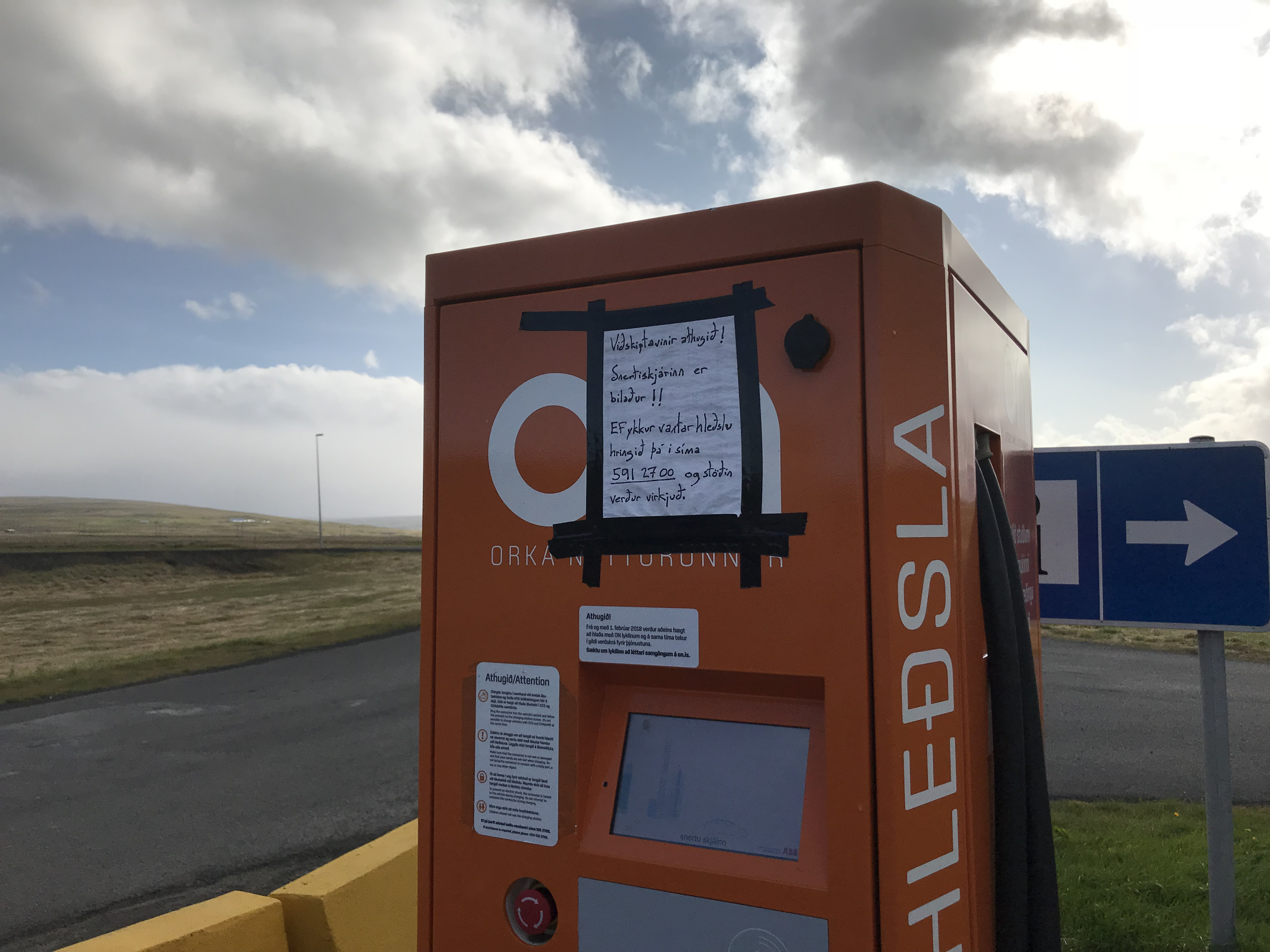 In another case, the station was undergoing some kind of maintenance, but it was out of action all day. We were forced to use the much slower AC plug next to it (these take about 8-9 hours to fill up our car!), so we got just enough to get us to the next station which wasn’t too far away. Which is where things really went wrong… 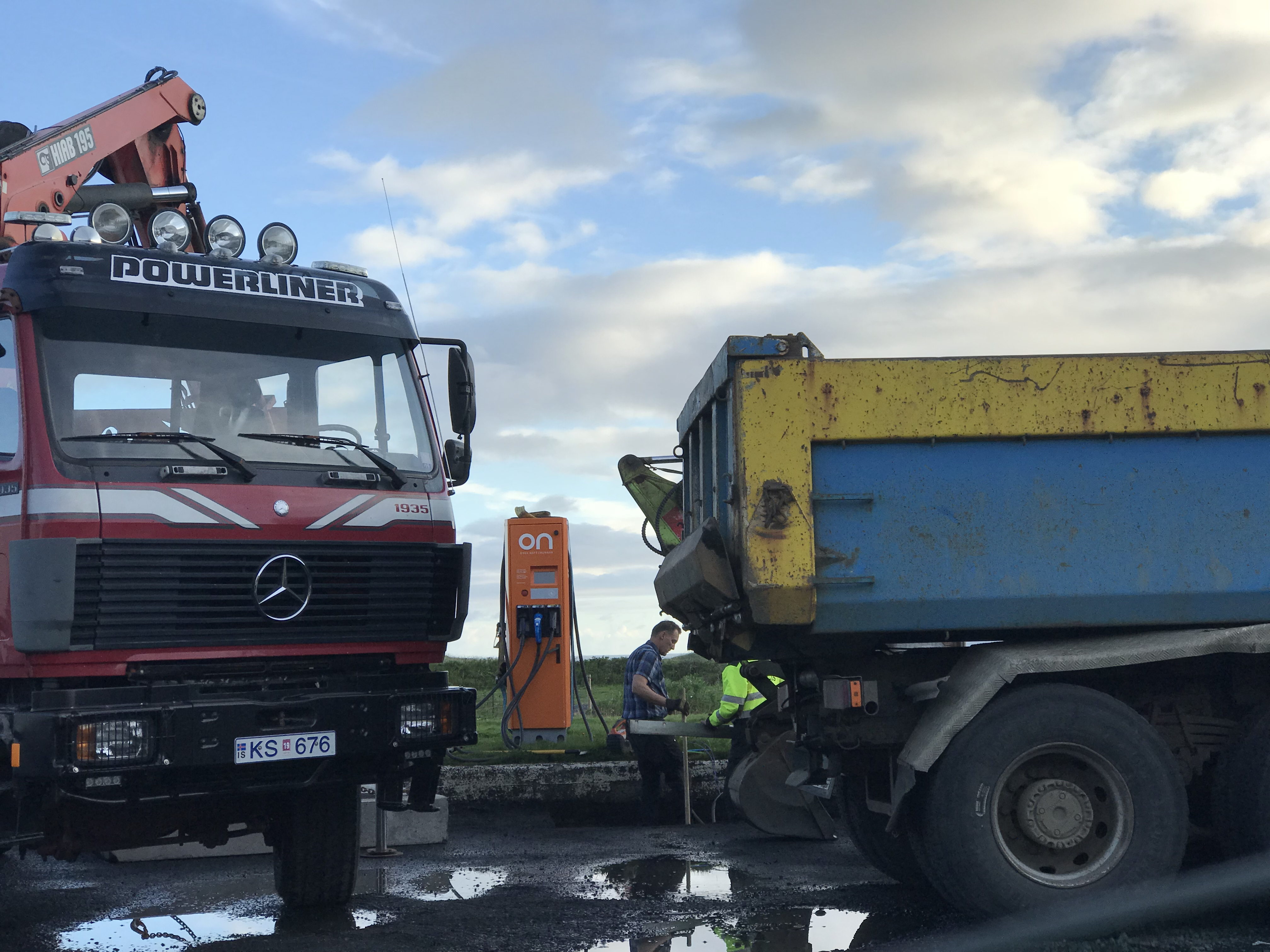 At the next station, it was also out of action but waiting for maintenance. No problem we thought, because they still had an AC plug right next to it which should still be working.

You see where this is going - the AC plug didn’t work either. We coasted into this town with about 20km to spare, neither plugs worked, and we had an appointment for a glacier tour later that day. We. Were. Stuck.

Frantic phone calls and internet searches ensued. During the course of these few hours, we: 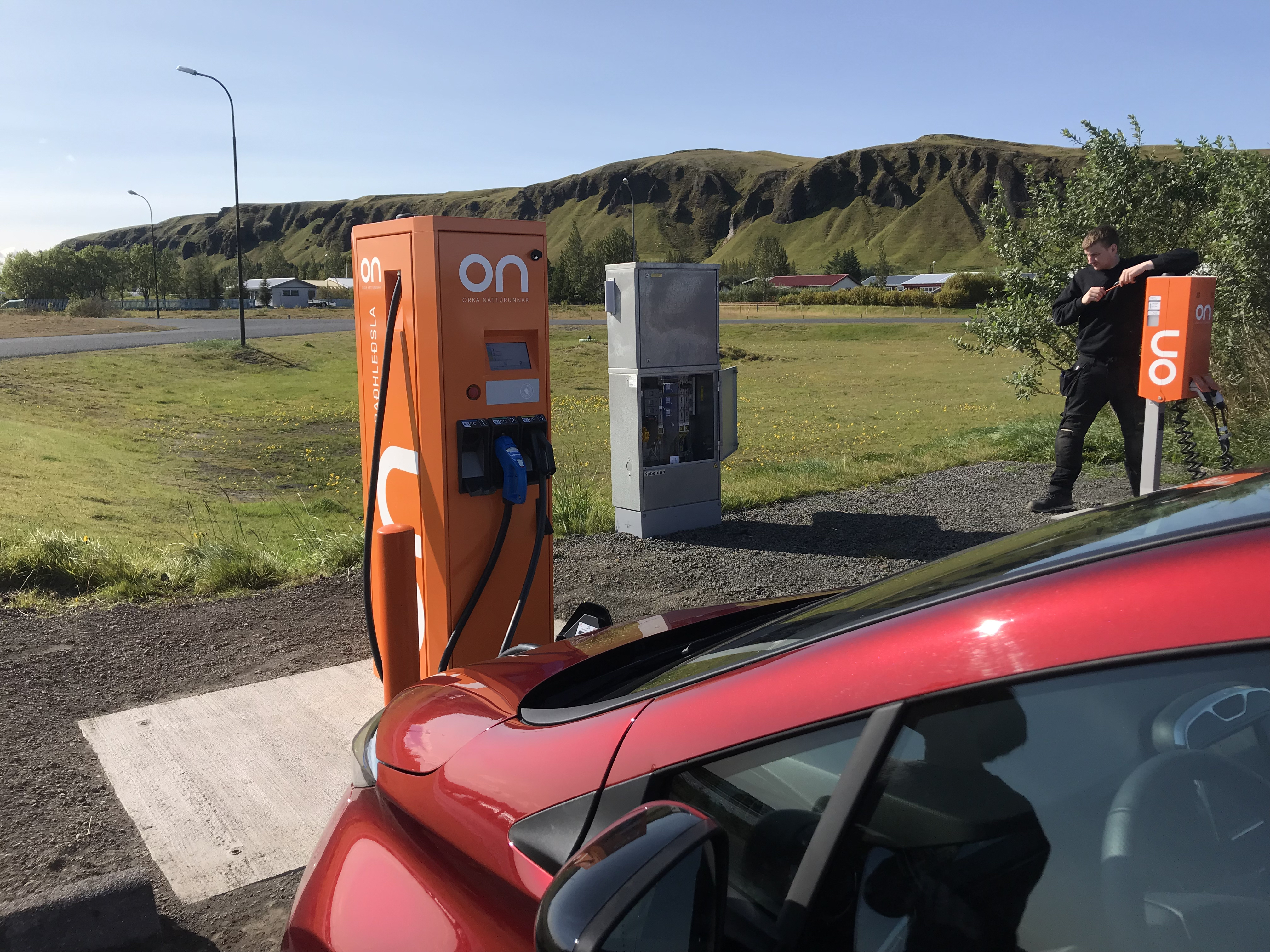 So we were very lucky to get out of that predicament in a somewhat timely manner. We even made it to our glacier tour, albeit at the next time slot. 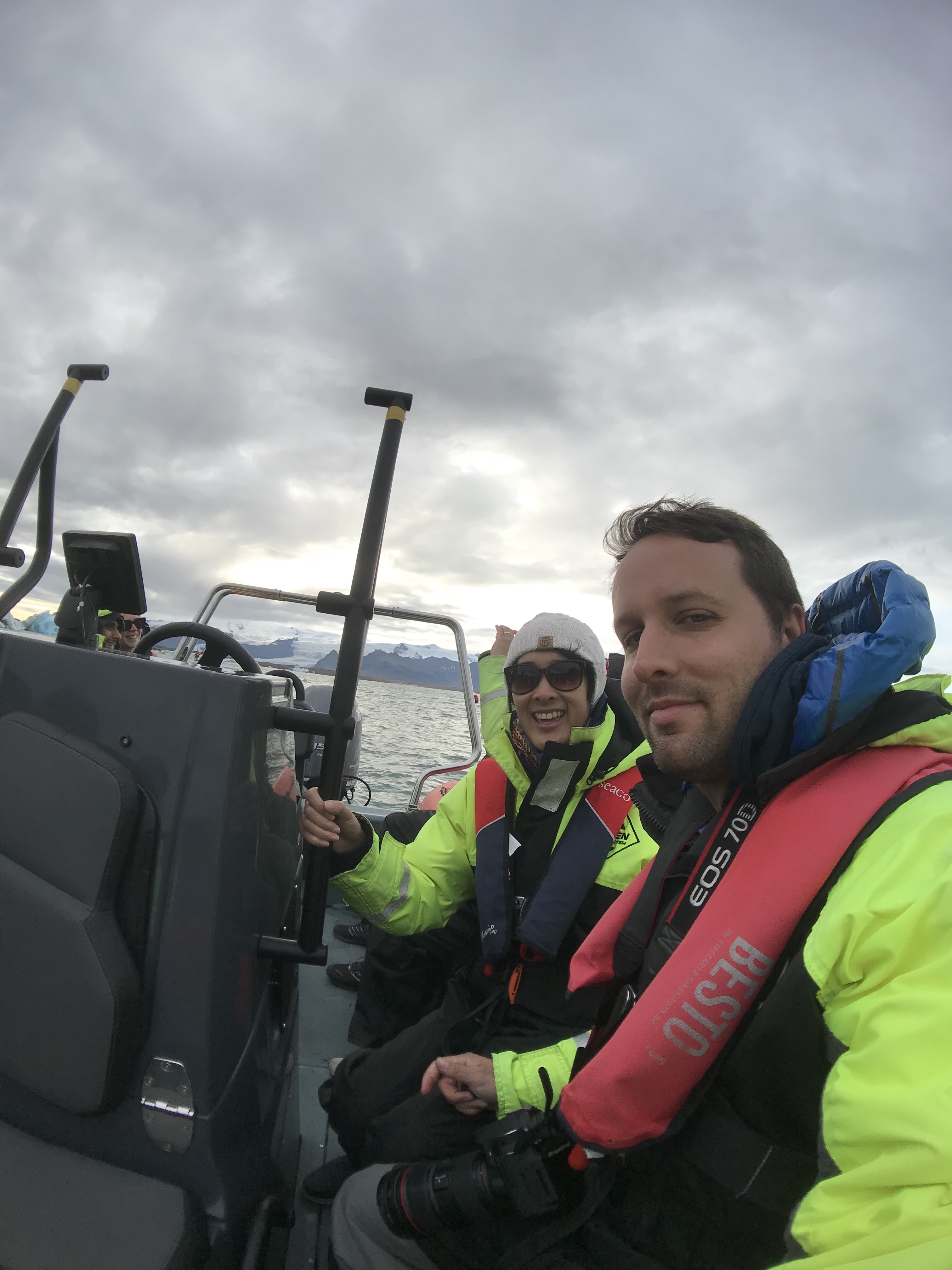 Gotcha #3 - Not all charging stations have the same power connectors

The Renault Zoe has a Type 2 charger, which served us well over the first half of the trip. However, we eventually got to the second largest metro area, Akureyri, and were greeted with this configuration of charging stations. 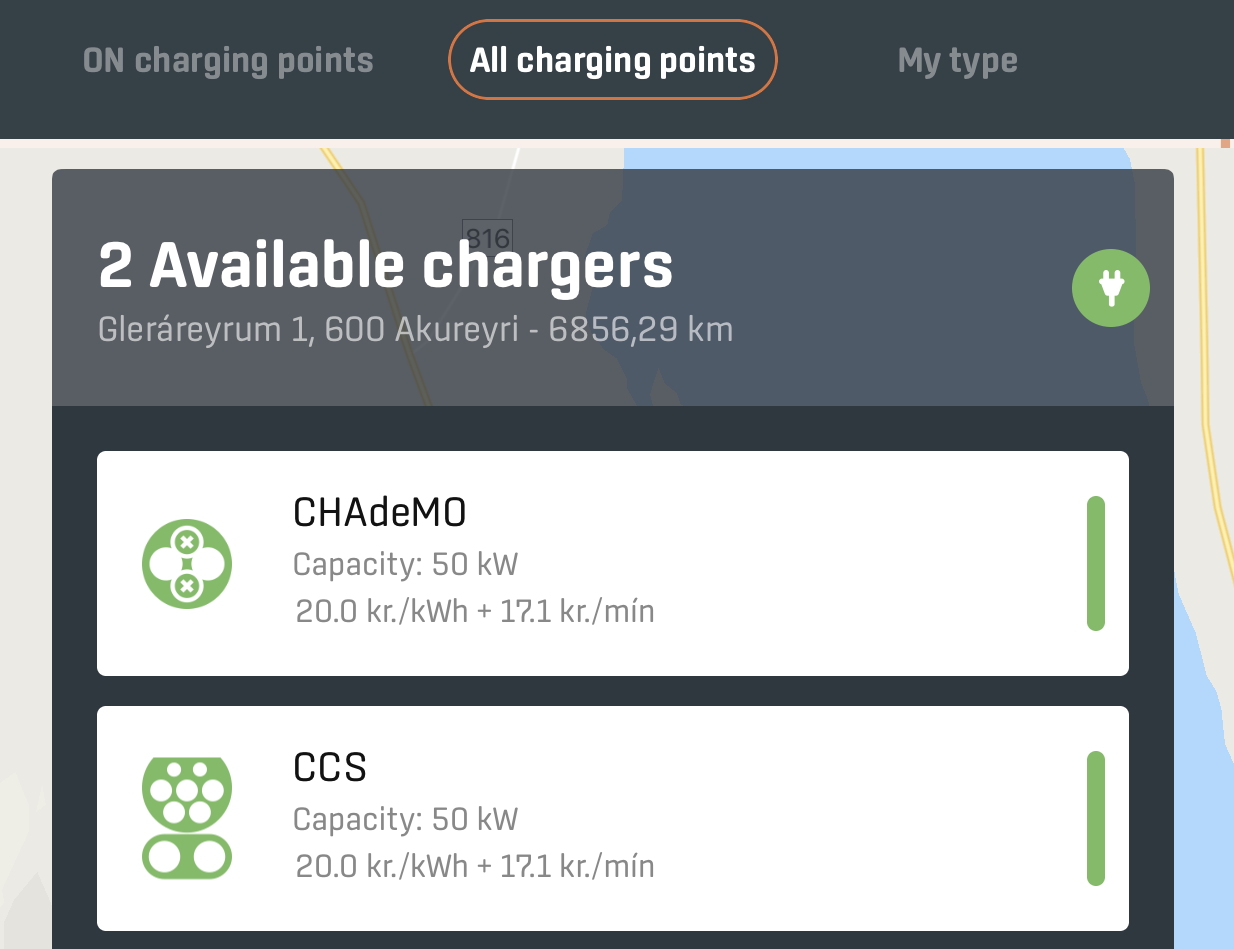 No problem, we thought. This is the most decent-sized city we’ve seen in a while and there’s charging stations everywhere. One by one we drove to find out that there weren’t in fact any Type 2 plugs. Some map locations weren’t even there. Worse, there weren’t even those typical backup AC plugs like in the rest of the country.

With our range running out and our prospects dimming, we decided to risk visiting this other charging station outside of town. It was only a few kilometers. 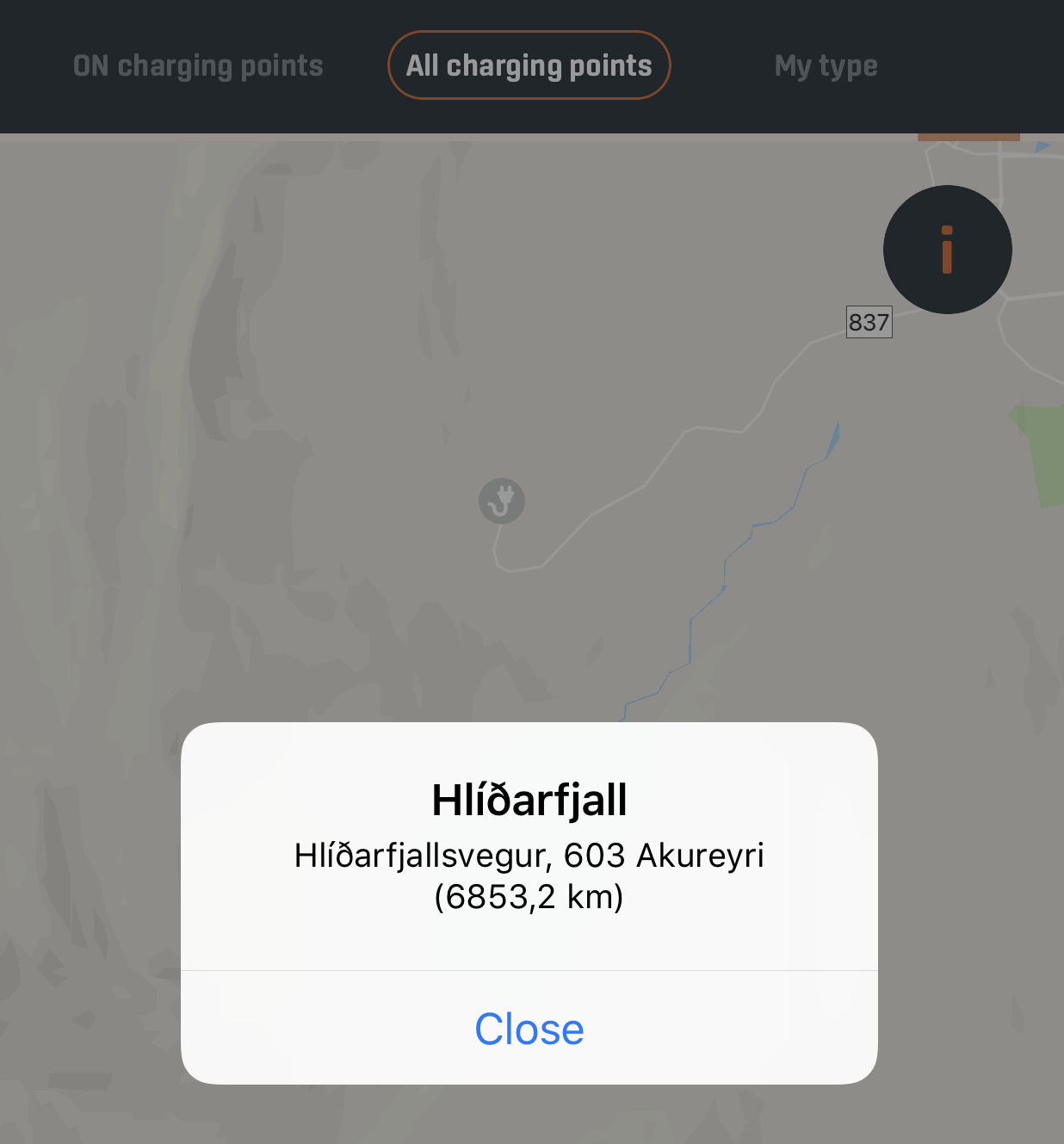 Little did we know that those few kilometers were straight up a mountain. This charging station was at a ski resort! We watched our range bleed away as we climbed the mountain, desperately hoping this station would work. And against all odds it did (or else I wouldn’t be writing this post). Outside of town, at this ski resort which was closed for the season at a random-brand station that we didn’t seem to have to pay for. Lucky as well that the maintainance vehicle wasn’t permanently parked a few meters over to block it.

It was a sometimes harrowing experience, but knowing what we know now, we’d totally do it again, albeit with these lessons in mind:

We are definitely hoping that they continue to build out the charging stations around Iceland. With a more modern electric vehicle and given the size of Iceland, driving electric all around the country is feasible and even enjoyable!

Would you rent an electric car?