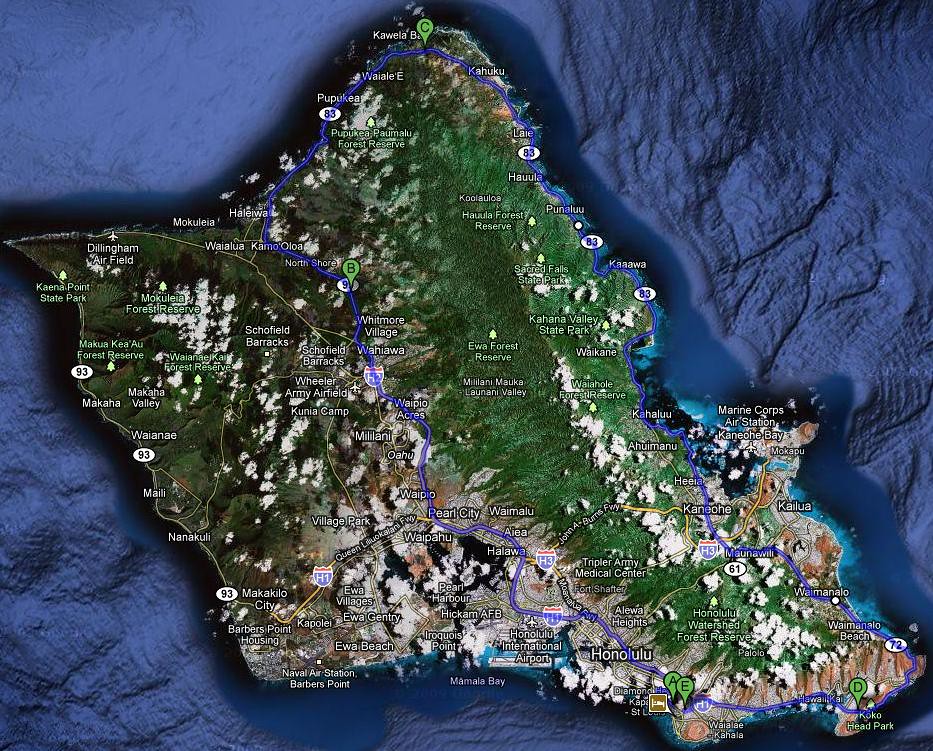 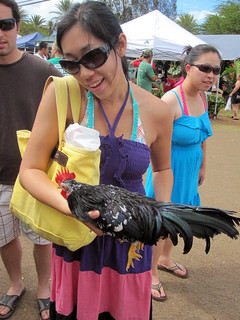 After visiting the Dole Pineapple Plantation on day three, we hit up the famous shrimp trucks of the North Shore!

On the way there, we stopped briefly in Haleiwa when we came across the Taro Festival/Farmers’ Market. It wasn’t large, but it was a great opportunity to check out the local market. There was a guy promoting chicken raising, so of course, I’ve included a photo of my sister with one.

Ryan and I would love to raise chickens for eggs once our backyard is set up. We learned about it at the state fair, so it was neat seeing a guy talking about it at the farmers’ market.

From the farmers’ market, we headed eastward towards Kahuku where the famous shrimp trucks convene. First, we were at Romy’s. It was more of a shack, rather than a truck. We stood in line in the sun for about an hour. 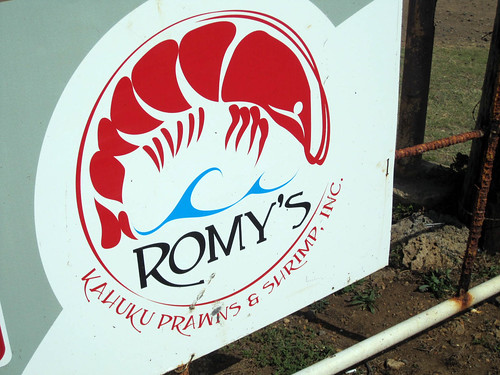 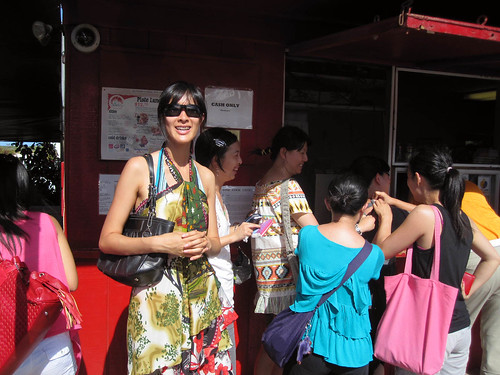 The choices were pretty simple and made simpler by the fact that they’d already run out of a few choices. We ordered the first two prawn plates on the menu! 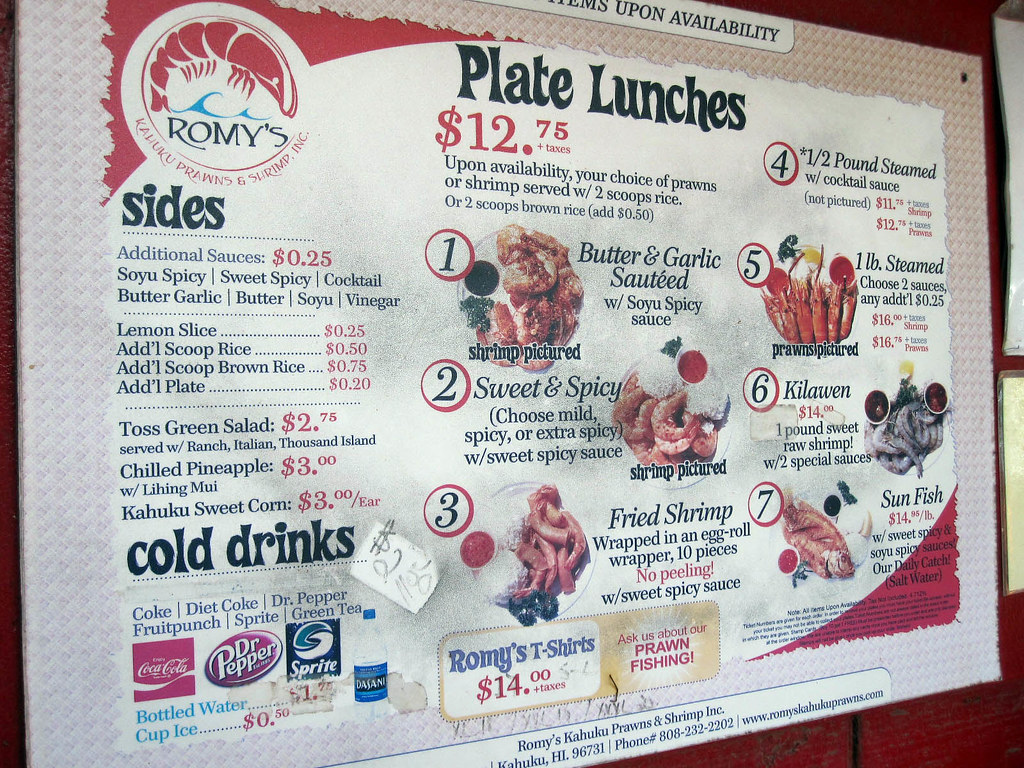 Since there would be a 40-minute wait for the food, Ryan and I left for Giovanni’s to see if we could pick up more shrimp plates before Romy’s would be ready. It was just down the road and definitely more of a shrimp truck. There wasn’t much of a line at Giovanni’s because I think they prepare the shrimp ahead of time, whereas Romy’s makes them when you order. 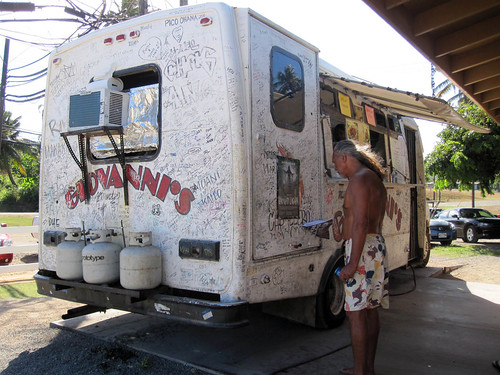 At first I wanted to compare the two, but they are really each in their own category - your made-to-order shrimp plate and your shrimp plate made quick-style.

When we drove back down to Romy’s, the food was still being prepared. So we started on the plates:

Of the Shrimp Trucks - Giovanni’s: 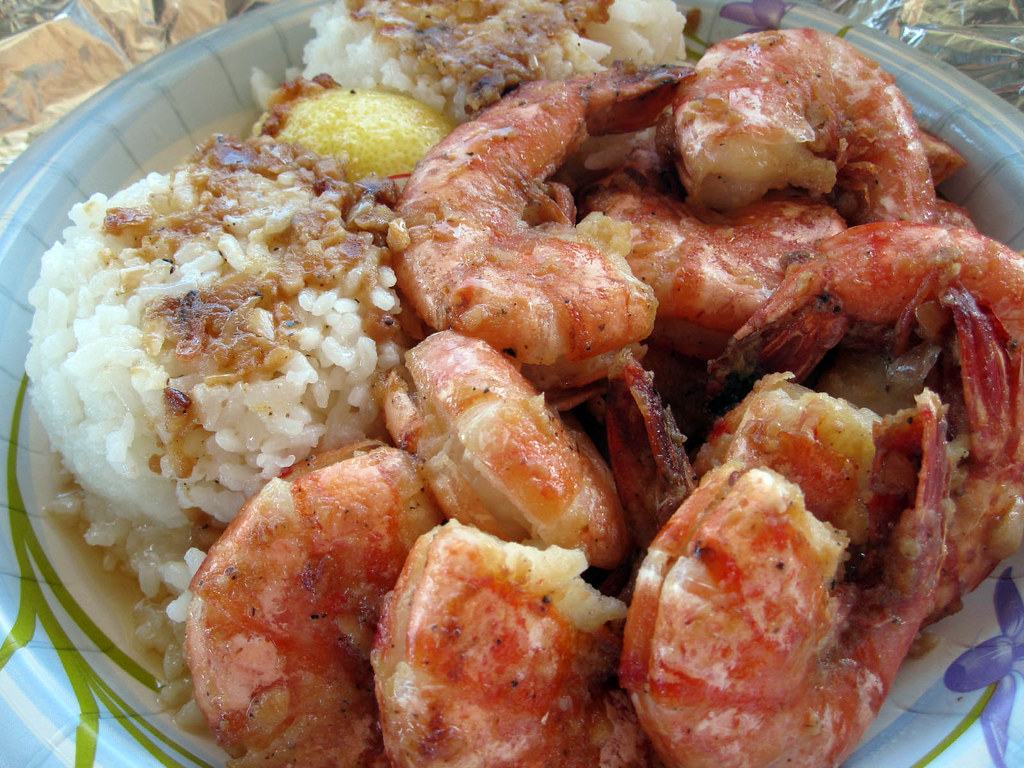 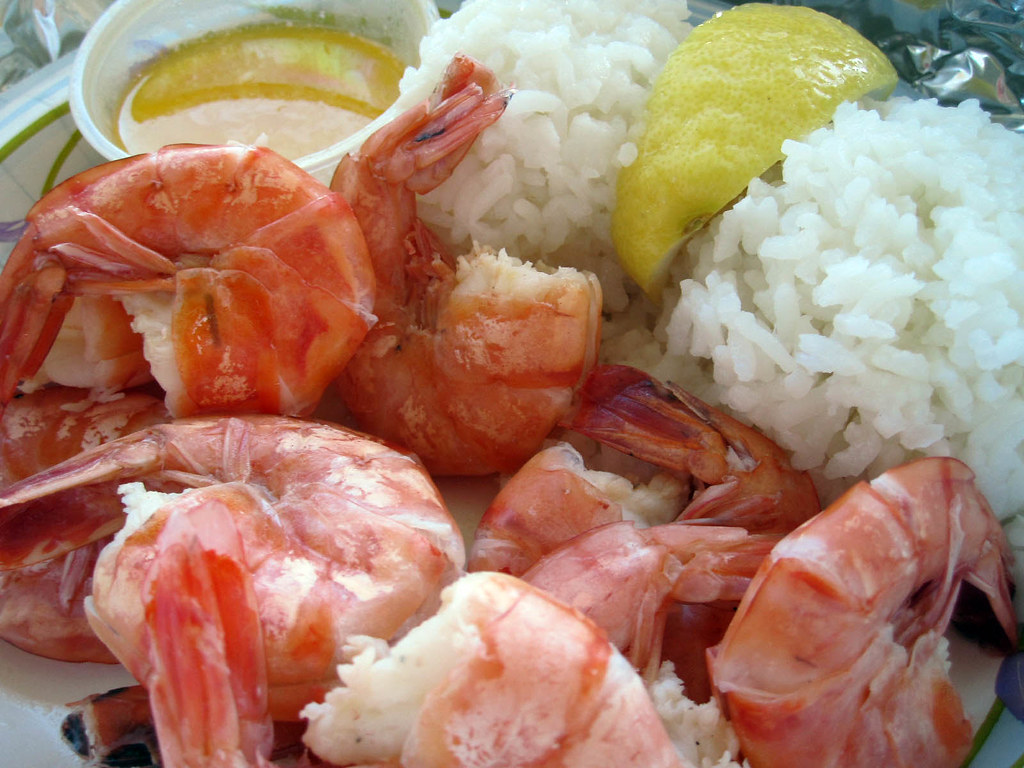 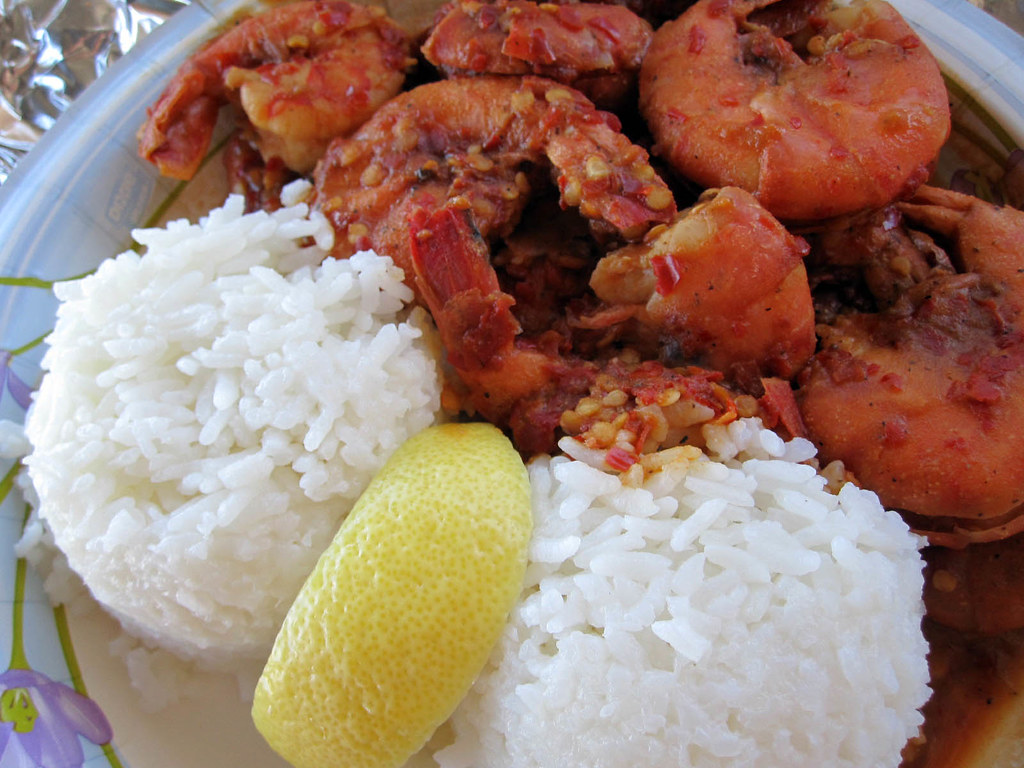 Spicy Shrimp Plate - SOO spicy that it left our mouths on fire!

Of the Shrimp Trucks - Romy’s: 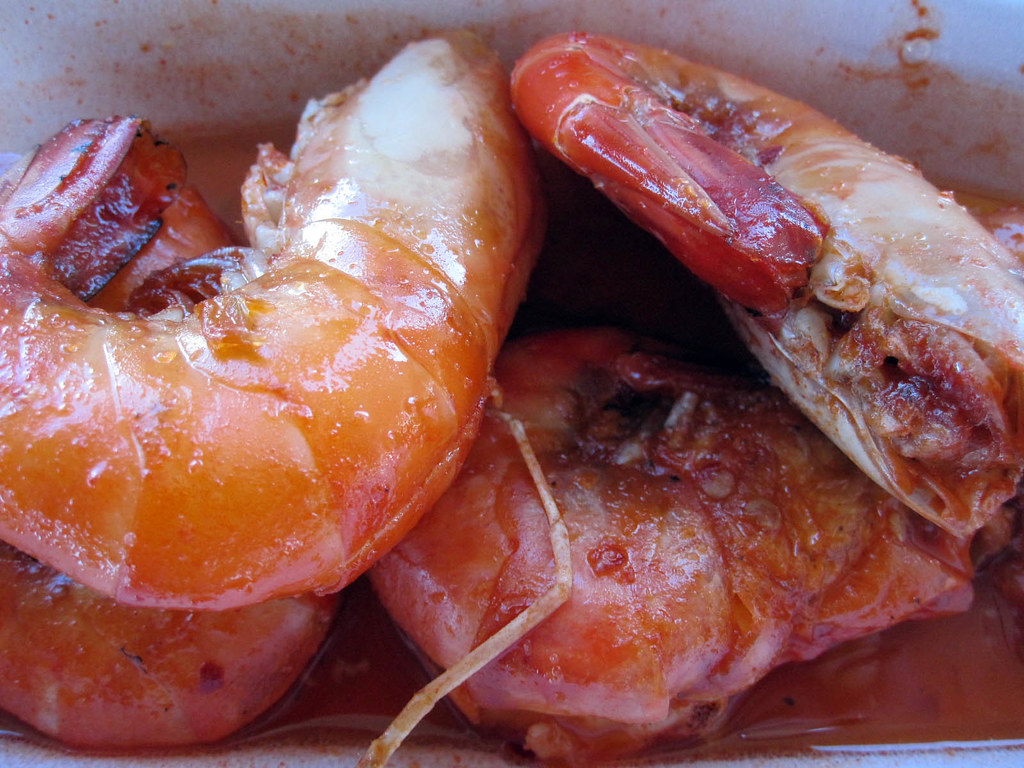 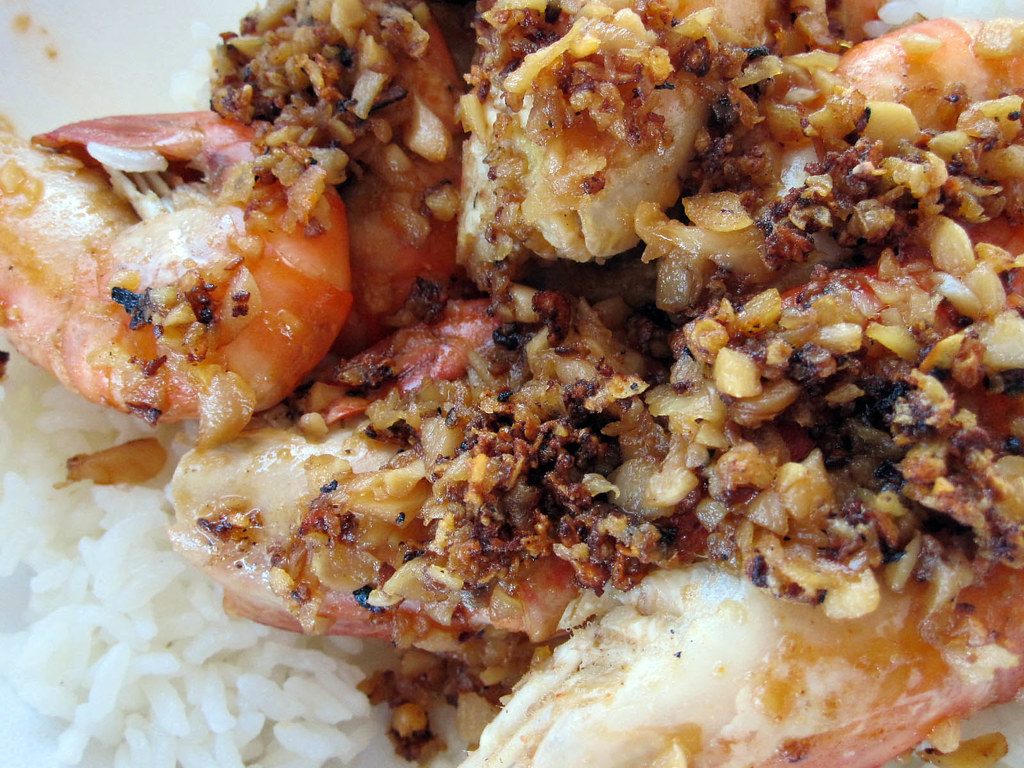 Butter and Garlic Prawns sauteed in shoyu - look at those garlic chunks!

I was licking my fingers! The overall consensus of the group was that we liked both.

Giovanni’s is good for its quick and tasty shrimp scampi, but if you are willing to wait, Romy’s is the way to go! The prawns were crisp, juicy, and oh-so-flavorful. They bring them in straight from the farm behind the shack. If you check out their website, there are coupons to be printed out, and it’s buy ten, get one free!

All the poke and shrimp plates of Hawaii have left my stomach longing for another trip, and we only got back less than a month ago!